How haulage and fleet operators can improve employee retention with technology

In August 2021 McDonald’s announced it had run out of milkshakes and bottled drinks, KFC and Nando’s were forced to shutter their doors due to lack of stock, and reports of empty supermarket shelves across the UK were rife. The managing director of Iceland, one of the UK’s largest supermarket chains, even announced that the company was actively cancelling 30-40 deliveries per day as he warned of incoming stock shortages over the Christmas period.

The common theme? A shortage of more than 100,000 haulage and fleet drivers that have either retired early due to IR35 reform, or left the country as the result of Britain’s departure from the EU. What’s more, due to the COVID-19 pandemic, the average time it takes to train up new HGV drivers has increased from 1-2 weeks to more than 8 weeks for a significant portion of the industry. This is presenting haulage and fleet operators with an unprecedented challenge, many renewing their focus on driver retention and other incentives to keep their workforce engaged, connected and invested in their work. But with a workforce that’s dispersed by its very nature, that’s easier said than done.

Why is driver retention so difficult?

There are an estimated 2.7 billion deskless workers worldwide, and their employers all share a similar challenge. Namely, how to keep their teams connected, engaged and under the same cultural umbrella when they’re constantly on the move. This is arguably felt most acutely by haulage and fleet operators, whose drivers could be thousands of miles away from the nearest depot at any given time. HGV driving is a relatively solitary existence, making it difficult for operators to engage their drivers in a meaningful way or involve them in company culture. This has a direct impact on things like onboarding and retention, particularly during high-pressure periods like the one the UK is experiencing at the moment. According to the Road Haulage Association, more than 40% of drivers that have left the profession have moved to completely different industries. It’s also worth mentioning that the average age of an HGV driver in the UK is currently 55, indicating that operators aren’t doing enough to attract and retain younger workers. So, what can be done? 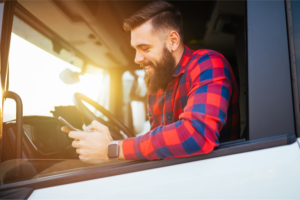 Creating and nurturing a warm, welcoming and engaging “workplace” culture might seem impossible in an industry where employees are rarely in the same place at the same time, but with the right technology in play, it’s a perfectly achievable goal. Take Engage4, for instance.

Designed specifically for deskless teams that are constantly on the move, Engage4 is the ultimate employee onboarding, engagement and retention tool for haulage and fleet operators. It’s an app-driven experience that involves no paper-pushing whatsoever, allowing drivers to feel connected to their peers and their employer at all times, involving them in company decisions and announcements, and giving them a place to train, learn, share and engage with one another whenever they’re not driving. Operators can runcommunity polls, for instance, inviting drivers to vote on various company policies. A check-in pulse function allows operators to check in on their drivers at safe and appropriate times, and micro-learning tools allow drivers to brush up on their skills and share their knowledge with one another at a time that’s convenient to them.

Engage4 also acts as a pocket HR department, taking the pain out of hiring and retention by storing documents within the app and pushing out company-wide announcements. It’s an all-encompassing solution to help haulage and fleet operators connect, onboard, unite and retain their drivers regardless of where they’re headed.

As we head into another season of uncertainty, operators will need every advantage at their disposal when it comes to engaging their fleet, and Engage4 goes above and beyond to equip them with everything they could foreseeably need. Learn more about Engage4 or register for a free trial.

Feeling the way to a new business culture

Understanding the role of technology in employee engagement – An interview with Steve Heckert, Devo Technology

Company culture at every stage of the employee journey

Will AI eventually replace human interaction in the workplace?

Are you taking a multimedia approach to your employee communications?